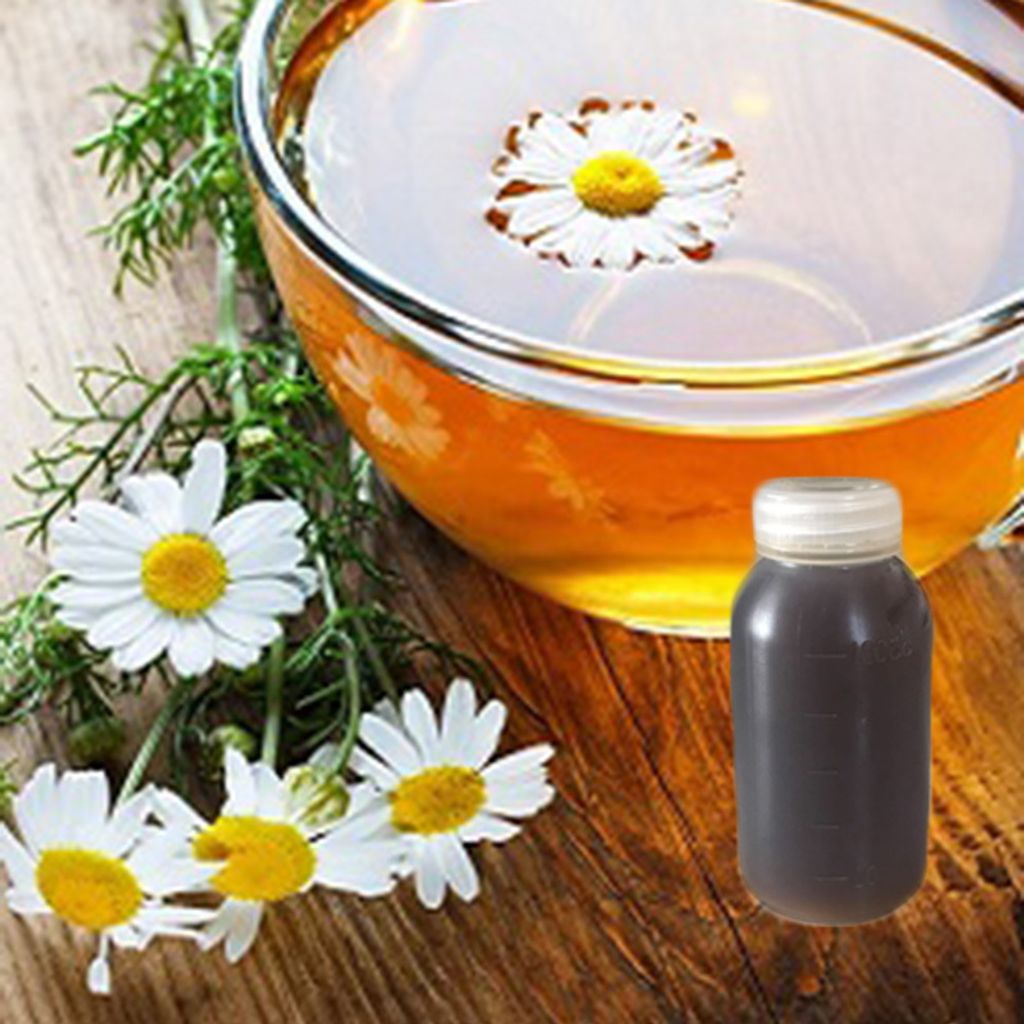 Other active constituents include the bioflavonoids apigenin luteolin and quercetin.

Chamomile has been used for centuries as a medicinal plant mostly for gastrointestinal complaints. This practice continues today.

Chamomile was supposedly dedicated to the sun by the Egyptians because of its curative value in the treatment of ague. It is used in various parts of the world as a table tea. It was used to regulate monthly periods. It is splendid for kidneys spleen colds bronchitis bladder troubles to expel worms for argue dropsy and jaundice. The tea was believed to make an excellent wash for sore and weak eyes and also for other open sores and wounds.

Chamomile was used as a poultice for pains and swellings. Used for hysteria and nervous diseases prevention of gangrene for breaking up typhoid and in combination with bittersweet for bruises sprains calluses and corns.

Among the oldest known medicinal herbs chamomile was used by the Egyptians to cure ague and as an offering to their gods. The aroma of the fresh flowers is similar to the scent of certain apples. The Greeks noting this characteristic called it 'kamai-melon' (ground apple). The Arab herb physician Abul Abbas mentions how the use of this plant spread from the Middle East to Spain. Hippocrates described this herb as helpful in the treatment of congestion and dysmenorrhea. Dioskurides Galen and Plinius also recommended chamomile tea for inflammation of the mouth and a sitz bath with chamomile tea or tincture added in cases of painful menstruation.1 The essential oils of chamomile and chrysanthemum were frequently used in the treatment of malaria. Oil infusions of chamomile or the distilled essential oils are also popularly used to treat stomach ulcers as described by Saladin in the fifteenth century.

Chamomile extract oil tea poultice vapor and ointment are folk remedies but also have been used by medical practitioners throughout history. A comprehensive list of chamomile uses would be very long but the most common applications are for the treatment of anxiety insomnia vertigo gastritis colitis teething conjunctivitis inflamed skin bronchitis and laryngitis.

Chamomilla recutita the sun-loving plant of the plains is rich in active ingredients and has remained one of the most popular herbs since ancient times. There are different classes of active constituents which have been isolated and used individually in medical practice and cosmetics. The plant contains 0.24%・.9% volatile oil which is a wonderful blend of different individual oils. This oil extracted from flower heads by steam distillation can range in color from brilliant blue to deep green when fresh but fades over time to dark yellow. Despite fading the oil does not lose its potency. The oil contains a-bisabolol (up to 50%) chamazulene cyclic sesquiterpenes4-6 which directly reduce inflammation and are mild antibacterials. The essential oil also contains bisabolol oxides farnesene and spiro-ether which have anti-inflammatory and antispasmodic actions.

The active principles are a volatile oil of a pale bluecolour (becoming yellow by keeping) a little Anthemic acid (the bitter principle) tannic acid and a glucoside. The volatile oil is yielded by distillation but is lost in the preparation of the extract. Boiling also dissipates the oil.

Chamazulene an active ingredient of chamomile is a potent antioxidant valuable in the anti-inflammatory process.

(・-bisabolol was studied in experimental ulcer models with rats. One of the following were used to induce ulcers: 20 mg/kg indomethacin 3.5 mL 50% ethanol 0.05 mL 80% acetic acid or stress produced by periodic noise. (・-bisabolol inhibited occurrence of ulcers induced by indomethacin stress or ethanol and shortened healing time of acetic acid-induced ulcers.

A systematic comparison of spasmolytic action of the hydrophilic and lipophilic compounds of chamomile was carried out on isolated guinea pig ileum. Series of tests showed that the total extract and some of the ingredients had a dose-dependent spasmolytic effect on the smooth muscles of the intestine. The lipophilic (-) -bisabolol bisabolol oxides showed a marked papaverine-like musculotropically spasmolytic action while the essential oil had the least effect. The chamomile flavones apigenin luteolin patuletin and quercetin were also very active in their spasmolytic action. These studies showed that the lipophilic as well as the hydrophilic components take part in the therapeutic action.

Chamomile tea is known for its sedative and hypnotic effects. In a psychological study images were used to induce slight negative and positive moods in 22 subjects. Subjects visualized 20 positive and 20 negative scenes while under the influence of either chamomile oil or a placebo. Chamomile oil significantly increased the latency of all images and shifted the mood ratings and frequency judgments in a positive direction.

The development of depression and anxiety is frequent in menopausal women. In an experimental model inhalation of chamomile oil vapor reduced restriction stress-induced elevation of plasma ACTH level in ovariectomized rats. One mg/kg oral diazepam also effectively decreased the stress-induced ACTH level. Combined application of diazepam and chamomile oil vapor further decreased the stress-related elevation of ACTH. The authors suggested that chamomile oil might affect the GABAergic system in the rat brain similarly as the benzodiazepine agonist.

The anxiolytic effect of apigenin was tested in mice. Apigenin isolated from the aqueous extract of Matricaria recutita had a clear anxiolytic activity in mice as tested in the elevated plus-maze. A dosage up to 10 mg/kg produced no sedation or muscle relaxant effect. However a 10-fold increase in dosage produced a mild sedative effect. Binding studies of apigenin on synaptosomal membrane prepared from bovine cerebral cortex showed significant affinity for the central benzodiazepine receptor. Apigenin competitively inhibited the binding of flunitrazepam a benzodiazepine receptor ligand with a Ki of 4 ｵM and had no effect on muscarinic receptor 1-adrenoceptors and on the binding of muscimol to GABAA receptors.18 The authors concluded that apigenin is a ligand for the benzodiazepine receptors exerting anxiolytic and slight sedative effects but not being anticonvulsant or myorelaxant.

The effect of chamomile tea on the cardiovascular system is unclear. Twelve patients with cardiac disease underwent cardiac catheterization. Hemodynamic data obtained prior to and 30 min. after ingestion of chamomile tea demonstrated a small but statistically significant (p < 0.05) increase in the mean brachial artery pressure. No other significant hemodynamic changes were observed.19 However 10 of 12 patients fell into deep sleep shortly after drinking the tea.

The volatile oil prepared from flower heads (fresh or dried) by steam distillation has been tested against Gram-positive (Staphylococcus aureus Bacillus subtilis) and Gram-negative bacteria (E. coli Pseudomonas aeruginosa) as well as a fungus Candida albicans. Oil concentrations above 0.05% were very effective against the Gram-positive bacteria and Candida. The Gram-negative bacteria were relatively less sensitive20 except for Bacillus subtilis.21 The antibacterial effect may depend on the concentration of chamazulen bisabolol and bisabolol oxides in the extract. Even at low concentrations <100-ｵg/mL a-bisabolol and its spiro-ether were effective antibacterial agents and exhibited fungicide activity.

A partial antiviral effect of aqueous and hydroalcoholic extract of Matricaria chamomilla has also been described in cell culture and animal studies. The aqueous extract lowered the tick-borne encephalitis virus titer in kidney cells and induced the resistance in virus-infected mice. In addition hydroalcoholic extract in the early stage of poliovirus development inhibits cellular and viral RNA synthesis.

Chamomile preparations are widely used in skin care products to reduce cutaneous inflammation and other dermatological diseases. In a double-blind trial chamomile extract was tested on 14 patients after dermabrasion of tattoos. The drying effect on weeping wound areas was followed as an objective parameter. Researchers observed statistically significant decreases of the wound areas as well as a drying tendency.25 Anti-inflammatory activity of witch hazel distillate (Hamamelis virginiana) applied topically on 24 patients was compared to chamomile and to 1% hydrocortisone cream. Erythema and moist desquamation which are side effects of radiotherapy were treated with chamomile cream and almond ointment. Fifty women who had undergone breast cancer surgery were included in the study. Each woman received 2 Gy per treatment 5 times a week (6 MeV electron beam on the scar area). Researchers found a small advantage in the protection (skin changes appeared later) in the chamomile cream group but in the comparison no statistically significant differences were observed in the areas tested. In another clinical test erythema was induced by UV irradiation and was treated with either hamamelis extract with phosphatidylcholin emulsion chamomile cream or 1% hydrocortisone. Skin blanching was quantified by visual scoring and chromametry. Both the hamamelis and the chamomile reduced redness but the hydrocortisone had a greater effect when compared to the herb cream.

In a recent in vivo study with nine female volunteers chamomile flavons pigenin luteolin and apigenin 7-O-ﾟ-glukoside dsorbed at the skin surface and penetrated into deeper skin layers. This observation supports their use as topical antiphlogistic agents to treat inflammations in deep tissues.

The anti-inflammatory effects of a hydroalcoholic extract of Chamomilla recutita was tested in mice (1 mL of extract contained 50 mg of dry product). A 2.5% emulsion of croton oil was used on the ears of animals to produce edema. A dose-dependent response was observed when chamomile extract was used to reduce edema.

Stomatitis is a frequent dose-limiting side effect of 5-fluorouracil-based (5-FU) chemotherapy. The ulceration can be painful and may limit future cytotoxic therapy. In a randomized trial 164 patients used chamomile mouthwash or placebo along with 30-min. oral cryotherapy to reduce developing stomatitis from 5-FU treatment. In a 14-day trial chamomile or placebo was administered 3 times daily starting at the first day of chemotherapy. Combined results from this trial did not support significant differences between chamomile- and placebo-treated groups. However subset analysis based on gender revealed that chamomile might be beneficial for males but detrimental for females. No plausible explanation was found for these results.

The chamomile news is that chamomile has similar soothing effects on the skin. The special strain of chamomile flower discovered by the European almost 40 years ago is rich in levomenol a key skin-smoothing component that has a dramatic effect on the skin in terms of improving texture and reducing fine lines and wrinkles caused by pollution stress and sun.

The use of chamomile dates back 2000 years to ancient Egypt where women like Cleopatra crushed the petals of the flower to beautify and protect their skin from harsh dry weather. Using an efficient but complicated process of steam distillation scientists can isolate and remove the essential oil from the herb's flowers and separate its primary active components: levomenol azulenes and flavonoids can be standardized keeping effectiveness the same from batch to batch bottle to bottle. The flavonoids in particular have documented antioxidant properties which are known to protect skin from the ravages of free radicals induced by pollution sun over-exposure poor diet or a host of other disease-causing agents. But it is only when these active components are used together in a standardized extract preparation that chamomile's skin-restoring properties are effective.