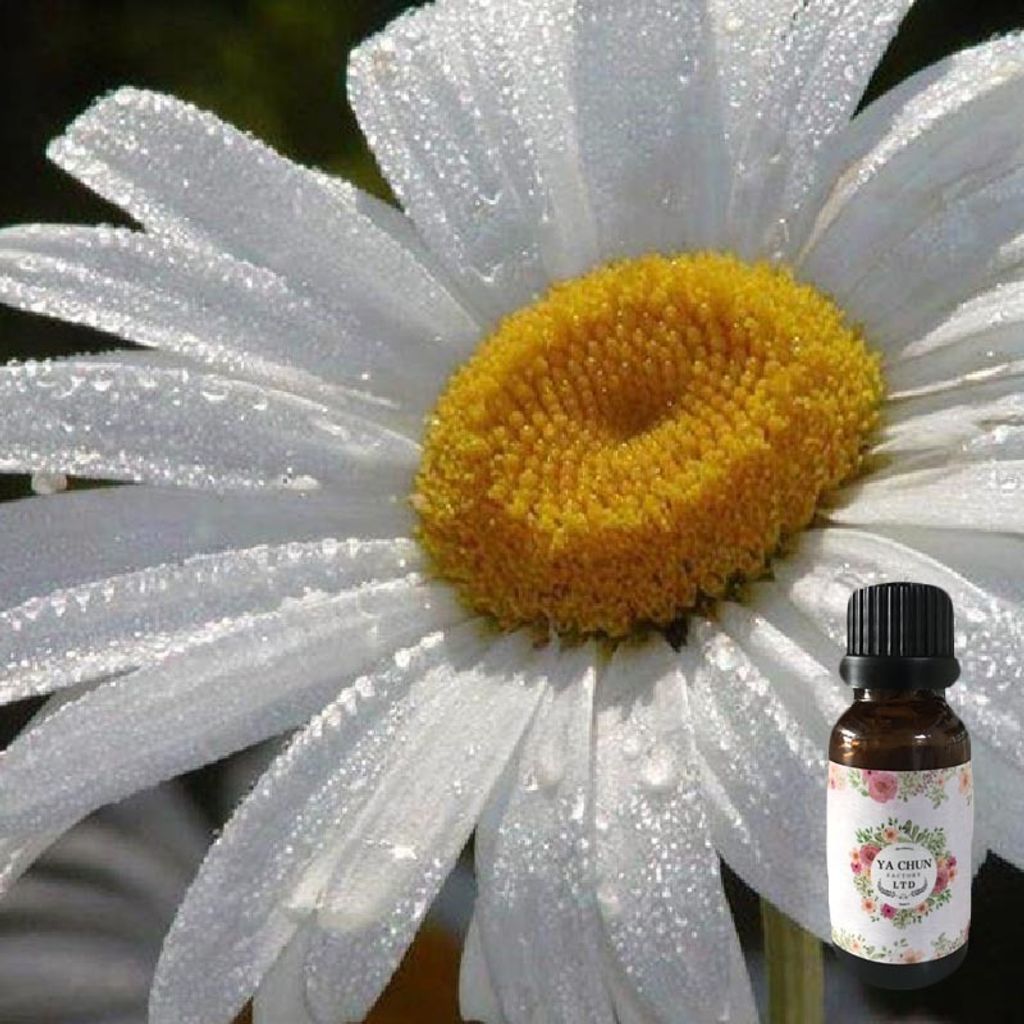 German Chamomile essential oils are distilled from flowers and provide excellent comfort. They relieve anxiety nervousness anger and fear make people relaxed and patient and feel peaceful. Relieving anxiety calming the mind and helping insomnia. A few drops of chamomile essential oil can be added to the hot water in the foot bath to achieve the purpose of activating the meridian of blood circulation and to achieve the effect of removing beriberi and foot odor. Chamomile is divided into two types due to different origins and different effects: Roman chamomile and German chamomile. German chamomile (Matricaria recutita chamomil.la recutita) is a beautiful sky blue. It is superior to Roman chamomile. Its leaves have apple sweetness warm and lush vegetation; flowers with apple aroma bright green; flowers Golden-yellow cone; aromatic flowers. When picking dried flowers it is better to use too dark a color complete leaves and no moisture.

According to Calpebo the Egyptians sacrificed this herb to the sun because chamomile can treat fever and other literature claims that it belongs to the moon's herb because of its cooling effect. The Egyptian priests in dealing with neurological problems particularly admired the soothing properties of chamomile. Historically it was honoured as the “physician physician” because it can indirectly treat other shrubs that grow around it. Its name comes from the Greek word for 'the apple on the ground' and its Latin name NobiliS means 'noble flowers.' It has been widely used in shampoos for many years especially for the moisturizing and brightening effect of light hair. At present it is mostly used in cosmetics and perfumes. Chamomile tea is an extremely popular helper for digestive problems. It also promotes good sleep and improves jaundice and liver diseases which is why it is added to the after-dinner drink.

German chamomile is a small perennial herb about 25 cm tall with hairy stems feathery leaves soft white daisies (larger than some German varieties of chamomile flowers); and German chamomile can grow to 60 cm high stems have Branched glabrous leaf blade fragile leathery head flowers single white born on a single stem. Roman chamomile is mainly cultivated in Germany Spain Italy Mexico and France while German chamomile is grown mostly in Hungary Egypt Eastern Europe and France. In Egypt it is a vanilla that is dedicated to the sun and can be used to treat fever; at the same time it is also a gift dedicated to the moon. Because it has a cool ability. It is recognized as an essential oil for soothing nervous disorders and can be used in shampoos cosmetics and perfumes. German chamomile contains chamomile ring a powerful anti-infective ingredient. In fact this blue crystal is not in the plant body but is formed in the essential oil and only a trace amount is required to exert a powerful effect.

Chamomile is known as 'noble flower' in Latin and 'Apple Fairy' in ancient Greece. The Egyptians dedicated chamomile to the sun and praised it as the god grass. Sacrifice is used as a problem to deal with nerve pain. The treatment of snake bites with chamomile in Roman times was a common knowledge for the people.

Production areas: There are three major production areas of chamomile the most superior is German chamomile also known as chamomile. Its essential oil is a blue liquid. After a period of use it will easily produce milky white floc in the bottle wall. Aromatherapy brands do not produce such products. Followed by Roman camomile its physical effects are more appreciated than those of Shumin. Once again it is Moroccan Moroccan whose efficacy is extremely subtle.

Roman Chamomile essential oils are sweet and a bit like apples. The color is light green clear and has water-like stickiness. The German chamomile oil exudes a straw-like scent that is dark green and medium in color.

Both Roman and German chamomiles have an excellent sedative effect. However Roman camomile is better for anger squeaking and emotional unpleasantness. It also has great value in treating pre-menstrual symptoms (PMS) and other menstrual and menopausal problems. German camomile is excellent for skin. The effect not only has a smooth and soothing effect but also has the effect of treating and regenerating the skin tissue.

1 The use of Roman camomile essential oils This kind of essential oil has a very good effect on children when they are emotionally anxious lack patience in the period of teething or when suffering from tinea pedis. If women use it they can relieve the symptoms of premenstrual discomfort. In general it is also effective for treating abdominal pain cholecystitis and throat infections. In addition it can relieve allergies hay fever and asthma. For the skin it can be used to treat acne eczema rash trauma dermatitis dry and itchy skin and general allergies. For infants it is possible to use a very low dilution to calm irritation and reduce toothache. It also has the effect of treating bruising dysentery and stomach cramps.

2 The Use of German Chamomile Essential Oil This essential oil has a gentle effect on mood and body and it has good curative effect in treating various types of inflammation regardless of internal and external inflammation. Treatment of urinary tract stones (bladder stones) works well. In addition it can stimulate the function of the liver and gallbladder which can promote digestion. In the treatment of menstrual problems and menopause there are good results. When used on the skin it will have a miraculous effect smooth redness dryness and allergic skin problems. It is also effective for sensitive eczema psoriasis and other skin problems.

The backwardness of ancient medicine and the pain caused by skin sensitivity are enormous. Chamomile appears as a gift from heaven. Until today as long as it is a soothing and anti-allergic skin problem chamomile is still mentioned first. This seemingly ordinary small white flower has long been regarded as 'the most gentle skin power' even the baby's tender skin can be used. Because of its soothing effect it can be used with many essential oils and skin care products to ease discomfort when the skin is improved. Medically chamomile not only relieves all kinds of pain such as muscle pain neuralgia and headaches. It is also more intimate and can relieve physical pain. It is often used to improve premenstrual discomfort and menopausal symptoms. 【Efficacy】 Analgesic anti-allergic anti-convulsant anti-depressant anti-emetic anti-inflammatory antipruritic anti-rheumatic antibacterial anti-convulsive expectorant flatulence promote bile secretion promote scab digestive diuretic soft skin pass through fever liver nerves sedation spleen stomach sweat make up drive worms cure wounds.